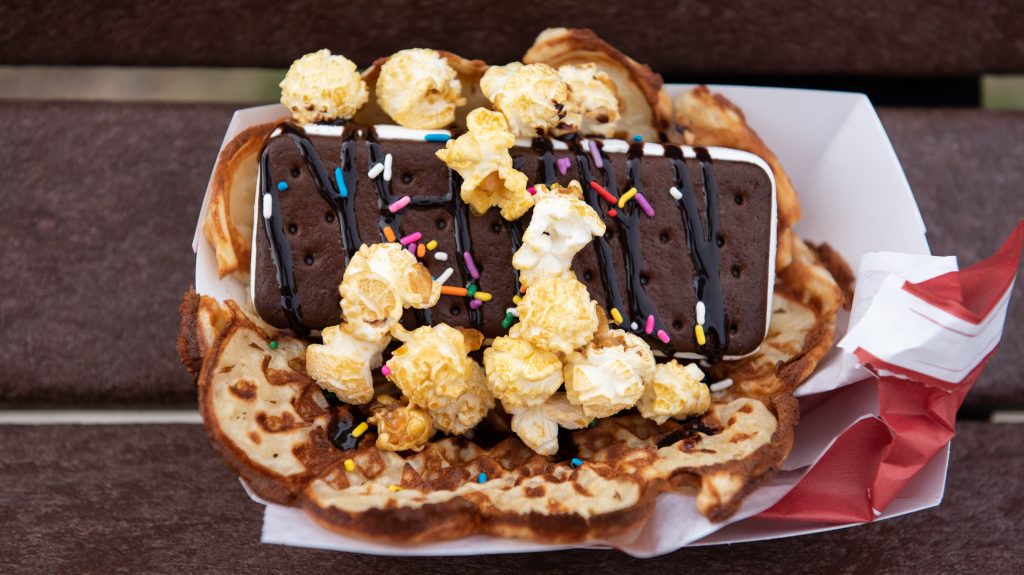 It was a first day of the Fair like no other.

We masked, we were careful when sharing food, we stayed away from other people as much as possible.

But still, we managed to have a great time.

It was the third year we’ve brought one of you along for the ride as we tried all the foods on the Minnesota State Fair’s official new foods list, and while I worried that the experience wouldn’t be as awesome this time due to the pandemic, I’m happy to say I was wrong.

Our contest winner, Megan Torgerson, and her husband, Chris Vitko, joined me, Pioneer Press Marketing Vice President Lori Swanson and Lori’s sister Becky Swanson. We tasted our way through all 25 items on the list and a few other new items because, well, we wanted to.

Torgerson, a Lutheran pastor and a former Miss Minnesota, is as Minnesotan as they come, in all but one way: She has opinions, and she’s not shy about sharing them.

It made her the perfect person to accompany us, but don’t take my word for it — check out her hot takes on Instagram at @pastortorgerson.

Here are our quick reviews to help you decide which of the new foods you want to check out this year. As usual, there was a lot of grease, a lot of sugar and a few surprises — some pleasant, some not.

Megan: This is great. It’s good to have the option of the bread, which is really good, or a bowl.

Chris: The sausage is really good, and the slaw is nice and tart.

Jess: I like that the bowl has a variety of grains instead of rice. Quality sausage, well executed.

(Sausage Sister & Me, located in the Food Building, east wall)

Megan: The sauce is really what makes it. They could be a little crispier.

Lori: That sauce is really good.

Jess: Very meaty, nice umami flavor. Didn’t get the advertised “kick” in the sauce, though.

Megan: It looks like a Smurf got murdered inside it, but don’t look at it, just eat it.

Becky: The filling is too mushy.

Chris: It’s dense for sure. You don’t need more than one.

Megan: It’s not what I expected. The buffalo icing is more sweet than spicy.

Jess: I wish it were fluffier and spicier.

Jess: Lots of great flavors in here. I like that it’s not just one-note sugary. The portion is huge, too.

Becky: I like it. The pudding is right on.

6. ChoriPop ($8) Chorizo by the Herbivorous Butcher dipped in a classic corndog batter, deep-fried on-a-stick with choice of avocado salsa or mole sauce:

Megan: If you didn’t tell someone that was vegan, they definitely wouldn’t know.

Jess: Thanks for bringing the delicious on-a-stick energy.

Lori: I thought this was meat. I think I like it even better knowing that it’s not!

Megan: The second bite got a little soggy, but I really like it. Like a nacho party. It’s definitely not a walk-and-eat situation.

Lori: This is my first pork rind! I thought it was good. There’s a lot of flavor in there.

Chris: The meat was good. I thought I’d be bothered by the pork rind instead of chips, but I like the flavor.

Jess: Pretty good nachos, but chicharrón are definitely better when they’re not soggy.

Jess: It’s chunky, and it’s hurting my throat. Dang, I really wanted to like this.

Megan: It’s a good biscuit and good fruit, but this isn’t what I think of as Fair food.

Chris: This is a really good biscuit. They actually give you a bunch of fruit, which is nice.

Lori: It has that sweet and salty thing going. I like it.

Jess: I love the crisp bits on the biscuit and that it’s not overly sweet.

Megan: Good portion, this is a nice little snack.

Jess: Really great, fluffy, creamy hummus. Everything that is in there is really well executed.

Lori: The presentation is great.

(Baba’s, located on the east side of Underwood Street between Lee & Randall avenues, just south of Little Farm Hands)

Megan: I really like chocolate, but this was just a lot of a lot.

Lori: I never like anything dipped in chocolate, it always tastes waxy. But it’s pretty and a huge portion!

(Minnesota Wine Country, located on the west side of Underwood Street between Carnes & Judson avenues)

Lori: I could eat a lot of those.

(Dino’s Gyros, located on the north side of Carnes Avenue between Nelson & Underwood streets)

13. Horchata Milkshake ($7) A milkshake flavored like the Mexican drink of the same name:

Chris: Like liquified rice pudding, in a really good way.

Jess: I love horchata, and I love this. Maybe a little heavy-handed with the cinnamon, but still great and a great Fair food.

Jess: The chicken is actually moist! Though if I’m being honest, I could probably make this at home.

Megan: It’s mild. Nothing overwhelming. It’s easy to eat and satisfying, though, and the portion is huge.

(The Hangar, located at the North End, southwest section)

15. Jumbo Donut Sundae ($8 for a jumbo doughnut, make it a sundae for another $5) A jumbo frosted yeast-raised doughnut available in a variety of flavors, topped with vanilla soft-serve ice cream, hot fudge and a blend of sprinkles:

Chris: The sundae thing seems like a complete gimmick to me.

Jess: I like the fact that it’s a doughnut at the Fair, and that it’s a good doughnut. The toppings are also properly whimsical. Win.

Lori: I think this is my favorite so far.

Jess: Might be the healthiest thing we eat today.

Chris: I was expecting it to be deep-fried, but it’s still tasty. I am impressed that they managed to get the sauce on all the cauliflower.

Lori: It’s nice to have an option for people who don’t want meat or deep-fried.

(Mancini’s al Fresco, located on the north side of Carnes Avenue between Nelson & Underwood streets)

Jess: It’s not fair to this biscuit that I just had a Betty & Earl’s (at LuLu’s).

Chris: The pork belly doesn’t come through at all.

Megan: It feels like fat bouncing off fat. I wanted to like it more than I did.

Lori: I like the looks of it, but I’m not feeling it.

(RC’s BBQ, located on the north side of West Dan Patch Avenue between Liggett & Chambers streets)

Chris: The mac and cheese is really light, so it doesn’t overwhelm.

Megan: I really thought I would hate (the chicken and mac waffle), but it’s really good. The ice cream sandwich one is just superfluous, totally unnecessary.

Lori: The ice cream sandwich one tastes exactly what you expect it to taste like.

Chris: Dry, not crispy enough. But the sauce is really good.

Jess: I really wanted to love this, and the sauce is amazing, but the paneer is kind of flavorless and the batter is chewy, not crisp.

Lori: When someone says cheese curd to me, I expect it to melt or squeak. This did neither.

Chris: You mean a calzone?

Megan: It’s pizza with a much thinner crust and an aggressive amount of sausage. But it would be easy to eat while walking around.

(Green Mill, located on the east side of Cooper Street between Randall & Wright avenues, at Family Fair at Baldwin Park)

Jess: The price is kinda steep for the Fair, but it’s probably the tastiest bite I’ve had so far.

Megan: A really awesome mix of textures and flavors.

Chris: I loved it. The tuna was really great. It’s probably my favorite of the day.

Lori: That wonton was awesome.

(Scenic 61 by New Scenic Cafe, located on the east side of Underwood Street between Lee & Randall avenues, just south of Little Farm Hands)

Lori: I don’t think you can ever go wrong with a good grilled cheese sandwich.

Becky: It has a pleasant sweetness.

Jess: There’s something off about this. Maybe the citrusy booze is tripping me up?

Megan: For $11, I want better than a fancy grilled cheese.

Chris: This fancy, beveled paper plate sure is nice, though!

Chris: It’s just a funnel cake with chocolate on it.

Lori: I liked it but I don’t think I’ve ever had a funnel cake.

Jess: This is a fun Fair gimmick (they spin it in front of you), and if you’ve never had naturally flavored cotton candy, you’re in for a treat.

Megan: Oh, this is incredible! Such deep berry flavor! I am not getting much basil, but I don’t really care.

(Spinning Wylde, located on the east side of Underwood Street between Lee & Randall avenues, just south of Little Farm Hands)

Jess: The Lake Storm Lemonade (infused with lavender) is just what I want at the Fair. Super refreshing.

Megan: That lavender lemonade is delicious. The rest are just kind of citrusy.

Jess: They really could have left the sugar off of this. Sweet overpowers everything, and I didn’t even dip it in syrup.

Lori: That would be better if the meat was a spicy sausage.

Becky: The hamburger is bland.

(Andy’s Grille, located on the south side of Carnes Avenue between Chambers and Nelson streets) 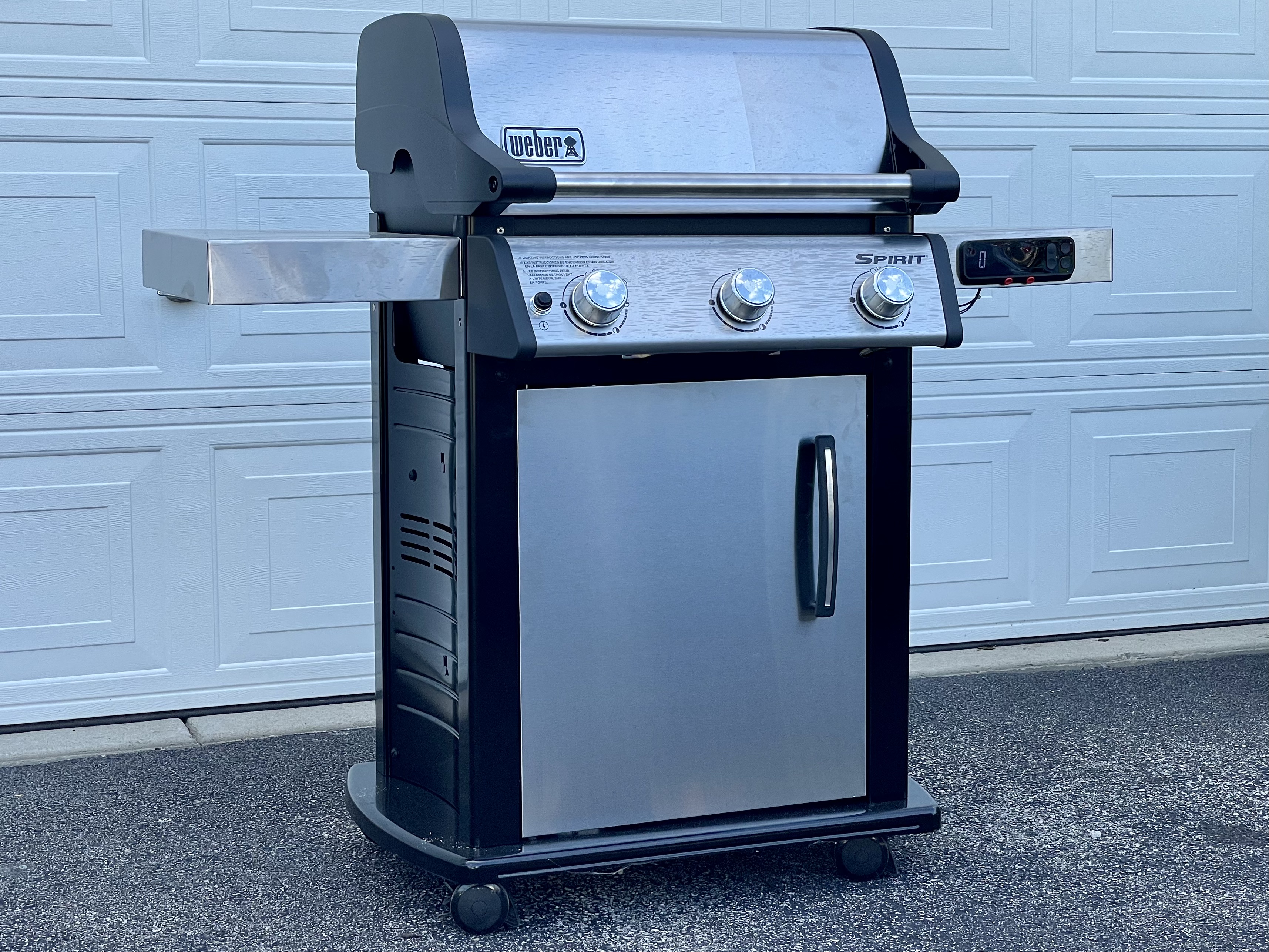